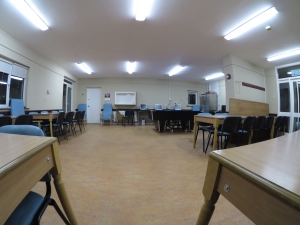 This is the interior of the Day Centre in Cambridge Court. Please double-click on the image to get a full appreciation of just how stark / sterile and  uninviting this room really is. It  looks like a recreation room in a prison / homeless shelter or some other such institution. There are no easy chairs or carpeting or anything to soften the austerity. The kitchen , where tenants are supposed to be able to make tea for their visitors or guests  is locked.  It is permanently  locked. The woman who holds the key ( ex matron) has refused to give the key to tenants who wish to use the kitchen. There is a snooker table in the middle of the room. Most mornings cursing/swearing  from the snooker players can be heard through the open door – so much so that on sunny days tenants who might wish to sit in the garden area are forced to return to their flats and close their doors to get away for the bad language and attendant noise.  The ex matron sits in this Day Centre most of the day and every day of the week. She is a coarse vulgar woman with an intimidating manner who is quick to take every opportunity to abuse fellow tenants. Given all of this it is of course  understandable that so  few tenants  use the Day Centre. I personally only go in there at night and then just to get away from the noise of the pub across the road ( Sally’s Return). None of this is an accident. This situation exist because it suits the bullies/thugs who are permitted by Dublin City Council to run Cambridge Court in a manner that suits only them. Dublin City Council are aided in this by the various do-gooders who inflict themselves on the tenants for reasons  that in turn suit these do-gooders.  One example of such people is Google.

This is not the place or time to do an in-dept analysis of the true nature and character of Google . Suffice it is to say that Google are the biggest facilitators of pornography in the history of human kind. They work hand in hand with some of the most oppressive regimes in the world. They hold masses of personal information on you and I which could never be justified in the normal run of things  and the spend a fortune seeing to it that they pay as little tax as possible. Google is not some sort of  liberal or benevolent entity but it has a genius for marketing itself as such and has for the most part been very successful in this regard. One very important string in this bow of Google’s is its self perpetuated reputation  for putting money and good work back into the community.  (Considering the millions that they make the money they ‘put back’ is indeed  miniscule). Google  has no real interest in the local community. Hundreds of  indigenous  locals were ethnically cleansed out of the area of Docklands to make way for the Dockside apartments that the new Google workforce  would expect and need. Google’s  only interest is Google. The local community is just something to be exploited with the sole purpose of making Google look good. Recently ( just a few days ago ) Google sent some Google employees down to Cambridge Court as volunteers to repaint the Day Centre. They did not ask me or any other of the tenants if they wanted  this but simply sat down with the bullies and decide to do it. If they had asked me I would have explained that there was NO benefit  to the tenants in all this and that the only people who would in fact benefit would be the various groups of local people who use Cambridge Court for bingo or choir / sing song practice of various other activities. These people are of course friends of the bullies and are the ONLY people who actually use the Day Centre in Cambridge Court in the evenings. The tenants are in effect barred from the place and have to spend their nights in their flats looking at the walls if they don’t have anything better to do. And as I have already stated no one uses it in the day time either for obvious reasons. Google have the reward of the ensuing good publicity / political capital they get out of ‘helping’ the local senior citizens and the bullies take a bow for being instrumental in bringing this largesse  in the first place.  Both parties walk away smelling of roses. Dublin City Council look on with a benevolent smile on their face and everyone is truly happy. The myth that the old folk in Cambridge Court are being cared for and cherished grows  ever bigger. The power of the bullies expands with every charitable act……Everyone is happy.  Google get to look good…..Google is happy. The council get to feel and look good for providing the ‘ hardware’ in the first place and all the various other attendant do-gooders get to feel good (and empowered to do even more good)  so really and truly everyone is happy. The fact that Cambridge Court is a nasty , intimidating and lonely reality for most tenants is simply not an issue.

Not only have Google painted the place but they have also fitted a bank of electrical sockets along one of the walls for new computers they are supplying to the bullies. I say they are being put in for the bullies as they and their hanger- ons are the only people who use the computers or anything else in the Day Centre. The only practical difference all of this will make is to give the whole place and even more clinical/industrial look than it already has. And it will probable also faciliitate the bringing in from outside  Cambridge Court even more groups to use the place further isolating /intimidating the people who actually live there. I would like to invite you again to double click on the above images so that you might understand just how cold/clinical and generally uninviting this place is.

You may feel that all of this is pettiness and even vindictiveness  on my part but it has to be seen in context. When I first moved into Cambrdidge Court I wrote about the bullying in my blog. The bullies had their own semi-officail Cambridge Court blog but it was buried somewhere between page 50 and 80 of  Google , so much so that it took me over six months to actually find it. The bullies were not happy about my blog and tried in various ways  to intimidate and isolate me but as this just drew attention to my blog (and more traffic) they soon realized the value of having ones  blog on page one of Google  (as mine was) so they contacted Google who obligingly came out and fixed their blog so it now features in first place on the first page of Google (it is almost never updated and has or had no readers) . It is immovable. It is stuck there. It is fixed. I should say here that Google knew I had a blog that was dealing with bullying in Cambridge Court. They had read my blog and even complemented me on it……..even going so far as to suggest that I help them teach other tenants about how to blog. The fact that I declined their offer did not help I’m sure to make them sympathetic to my anti-bullying cause. Google’s  sole contribution in all of this was to give the bullies even more power than they already had and this AFTER I had informed them  of exactly what was going on. While all this was going on Crooscare  decided to start a snooker tournament so now we have even  more people coming into the Day Centre. These people spend most of the time swearing/cursing at the top of their voices so much so that on sunny days tenants have to forgo the sun and lock themselves in their flats to get away from the noise. And here’s the beauty of it– Crosscare don’t pay a penny in rent to Dublin City Council . They did not have to wait on the waiting list for 5 to 10 years….They are not  tenants of Dublin City Council and yet they , with the blessing of Dublin City Council have forced this nuisance on myself and other tenants. There are a whole army of people out there who don’t live in Cambridge Court , don’t pay rent in Cambridge Court but in spite of this have  a greater say in how Cambridge Court is run than any tenant is ever likely to have. Crooscare don’t pay rent – I do ……but Dublin City Council don’t listen to me , don’t care if I’m happy or not or even if I am suicidal. And let me repeat something that I said in a previous post.  Tenants have transferred out of Cambridge Court because they were being driven to thoughts of suicide.

As I write this it is Tuesday night , bingo night in Cambridge Court. The Day Centre is packed with people who don’t live in Cambridge Court. The tenants are stuck in their flats and if they are lonely and depressed  then that’s just tough luck…….And now , one last photo…….take a look at this last photo. It looks quite innocent. But double click on this photo and then consider what I have to say…..

I took this photo today. These cups are set out for the bingo crowd who will be in the Day Centre tonight playing bingo. None of these people live in Cambridge Court. On Thursday night and Friday night the cups will be laid out  again for  the other groups of non resident who use Cambridge Court on those nights. I have seen neighbours of mine die in Cambridge Court , I’ve watched people waste away with cancer and then die isolated and lonely in their flats……but I have never NEVER seen ANY tenant EVER have a cup of tea in the Day Centre.  I have seen people bullied out of their homes in Cambridge Court. I have seen tenants who walk the streets every day of the week and sit alone in their flats seven nights a week and NEVER NEVER have I seen even one of these people have a cup of tea in the Day Centre.  This is supposed to be the place where tenants can  go in to  sit down have a little chat and maybe a cup of tea and company ……but no one uses it. The bullies have seen to that.

This is wrong. This is immoral. This is nasty.

All the above was written yesterday. Today the snooker crowd were in Cambridge Court. For several hours they wandered in and out of the Day Centre cursing , swearing and drinking tea from the now open kitchen/canteen while the ex matron sat there wallowing ( a suitable word) in the glow of it all. The nasty habit some of them had of spitting on the ground at the door of the Day Centre did not seem to bother her in the least. This went of for hours until they left at which point the kitchen was locked up again as it will remain until tomorrow night when another group who don’t live in Cambridge Court will be in to use the Day Centre. This is wrong. This is nasty and it is immoral. This is BULLYING. ………..and it is going on every day of the week in Cambridge Court.